You are here: Home / Gold Bullion / What’s the Difference Between Gold Coins and Gold Bullion as an Investment? 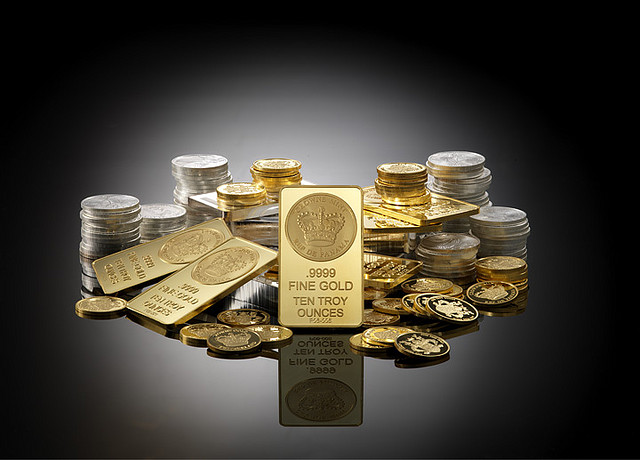 If you have decided that you want to add some physical gold to your investment portfolio, the next question to ask yourself is: coins or bullion? Generally when people consider the term “bullion,” they think of the giant bars of gold as portrayed in Hollywood movies, so for them the decision is clear – unless you can afford several hundred thousand dollars all at once, coins are the way to go.

However, most people have a mistaken idea of what “gold bullion” really is. “Bullion” in this case merely means, “a refined and stamped weight of precious metal.” It is valued by its weight and purity of metal as opposed to face value or rarity.  So gold “bullion” actually comes in two forms – coins, also known as rounds, and bars, also called ingots.

Gold coins come in two types, numismatic (also known as collectible) and investment grade. In this article, only the investment, aka bullion, coins are considered.

True, government-minted rounds may look like coins and may include a monetary value stamped on the face, but they are not legal tender and therefore are more accurately termed “rounds” than coins. However, “coins” is the commonly used and accepted terminology.

Gold coins are made by minting, which means that they are cut from flattened sheets of gold. The face and rear designs are applied by presses.


One-ounce gold coins minted by various world governments are the most popular coins, because they can easily be bought and sold at any coin dealer. The most common coins in the United States are the U.S. American Eagle, the Canadian Maple Leaf, the South African Krugerrand (the original investment coin), and the Austrian Philharmonic. China and Australia also make extremely attractive coins.

In terms of value, any one-ounce coin of equal purity should theoretically sell for the same amount, which should be an approximation of the current gold spot price. These coins may vary a bit in price based on their supply and demand at any particular time, importation charges, and other such incidentals.

Coins come in other sizes in addition to the one-ounce standard. American Eagles come as small as 1/10 ounce, which is approximately the size of a dime. Australia and China make 1/20 ounce coins, and Gibraltar and the Isle of Man make coins in 1/25 ounce.

Gold ingots are made by casting, which means molten metal is poured into a mold and allowed to harden. The markings are part of the mold.

Ingots can come in very large sizes, such as the 400 ounce bar generally portrayed in movies, which retails for over $600,000 at current prices.  This may be practical for many companies and large entities, but not so much for the average investor.

However, ingots come in smaller sizes as well, although they are not as popular as coins.  Ingots can come in sizes all the way down to 1 gram (approximately 1/30 of an ounce), but are most commonly found in the one ounce, 100 gram, and 10 ounce sizes.

Gold ingots are not produced by government entities, so you must take care to buy from known and trusted refiners. Two of the most reputable are PAMP (Produits Artistiques Metaux Precieux) in Switzerland and the Perth Mint in Australia.

The Effect of Premiums

Premiums are the mark-up added by the dealer, and are determined by adding a percentage to the current spot price of gold. Typical premiums can range from 1% to as much as 12% or more. Ideally you want to pay the smallest premium possible, and careful research can yield that information.

Coins that are extremely popular tend to be the most liquid and accepted, and carry smaller premiums. However, due to their popularity, they may carry higher premiums than similarly sized ingots.

Both ingots and coins are excellent ways to acquire physical gold for your investment portfolio.  Both should be considered when seeking to buy, and the item offering the best value, i.e. the lowest premium over the spot price of gold, is what you should purchase. This may vary from purchase to purchase. Each time you are ready to purchase, make sure to do the full research and find the best value at that particular time. Thus you will maximize your entry cost and ensure the most possible return on your investment.

This is a guest post by Daniel Roberts. Occasional guest blogger on online shopping and full time blogger on investing in precious metals.  Daniel currently represents Regal Assets the best source on the web to buy and sell gold coins online.