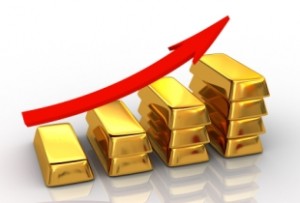 Gold price history is witness to the fact that the prices of gold have experienced massive surges over the last few decades. Regardless of what the economic conditions may be, gold prices have always been seen to be on the rise.

The gold price history is very interesting. In the United States, gold was a source of assigning value to the US dollar. This was more popularly known as the “gold standard”. However, this standard measure of value had to be abolished as the value of the dollar went down after efforts by the government to boost the economy. It was noticed that the prices of gold went up during this period, and this was when gold was seen to be a major threat to the domestic currencies as well as foreign currencies.

Since that time, gold has experienced a continuous upward trend in value, without any breaks. When 1973 approached, the price of gold had reached $120 and this is when many countries removed restrictions on the purchase of gold.


In 1974, Japan lifted these restrictions. In 1975, gold was being actively traded on the COMEX and was similar to any other product in the market, with the demand and supply determining the price. During the 1970’s, the prices of gold experienced massive fluctuations from over $240 to below $200. In 1979, gold prices rose at a very high rate, mainly due to the bad performance of the stock market. In addition to this, the strain in relations with Iran and the uncertainty in the production of oil led to the price of gold climb over $420 and dropped in 1980.

The purpose behind relating the gold price history is to inform reader of the potential that gold possesses in terms of massive increases in price. The most influential factors in driving the price of gold up are inflationary circumstances, international crisis and uncertainty of the stock market. The price of gold started from $35 in the 1970’s and reached $870 per ounce by 1979. This is perhaps the biggest motivation in using gold as an investment as its value is expected to increase over coming years. You need to be aware of all the factors that influence the price of gold before making a large investment in it. The gold price history and the present conditions of stock market uncertainty attest to a steady rise in price.

Update: In the first couple of months of 2012, gold is already trading at $1700+ an ounce. My ‘gold sense’ tells me that its not too far in the future that gold will certainly break the $2000 barrier and a new gold price history will be created. Check back this space.