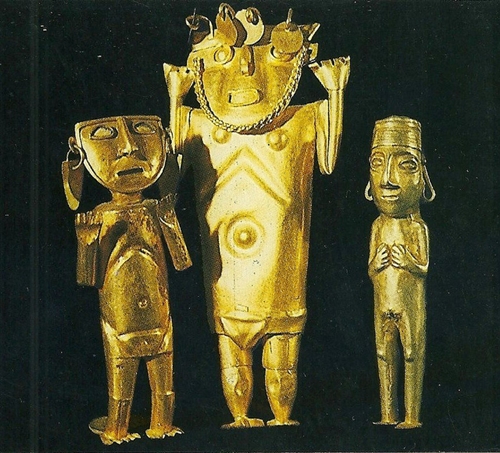 Gold has always been one of the most sought-after precious metals for coin and jewelry use. Gold naturally maintains its bright yellow color and its luster which makes it one of the more attractive precious metals around. Certain civilizations have come to admire the metal’s aesthetics in the past. The Greeks thought that gold is a very dense combination of water and sunlight. The Incas believed that gold represented the glory of their sun god and called it “Tears of the Sun”. The Egyptians considered gold to be the “Flesh of the Gods”, particularly their sun god, Ra.

Some people have the impression that gold is a very hard substance. This is understandable, since most people have only seen or felt Gold in jewelry or coins. However, the truth is that gold is a very malleable metal. In order to give it the hardness needed to turn it into jewelry or coins, it is melted and mixed with certain alloys. The truth is that a single ounce of this very precious metal can be stretched on into a 100 square feet area sheet.

2. Gold is a very Heavy Substance

In the movies, bad guys rush in and take gold bars from banks quite easily, but in truth, it is not at all that simple. The standard gold bar weighs more than 30 pounds. While it is true that gold is a very soft precious metal, it is also a very dense one at that. Think of it this way: A cubic foot of pure gold weighs around half a ton! Gold is even heavier than lead, even if lead has a greater atomic mass and atomic density. This is because gold is much more tightly packed with atoms compared to lead, since it gets much more density. So carrying a bag full of gold bars is not exactly as easy as it seems.


3. Most of Today’s Gold comes from Sifting through Soil

As a kid, I always thought that people dug up mines in order to find a good source for gold. Today, however, most of the gold comes from sifting through soil. This is because there are quite a lot of loose grains that have been eroded from mountains, and they usually travel through flowing water.

This may be a bit surprising for most people, but gold is indeed edible. There were quite a number of Asian countries that put gold in fruits, coffee, tea, and even jelly snacks back at the time. Also, the Europeans have been putting small gold leaves in certain brands of liquor like the Goldschlager. Just don’t try to eat a whole bar of gold though!

5. Gold is not Just for Jewelry and Coins

Some people might think that gold is only used in making jewelry or coins. The truth, however, is that gold is a very useful component in electronics. Gold is a very efficient conductor that can carry on very small amounts of currents yet remain free of any form of corrosion. Electronic components that make use of gold are very reliable overall. Another thing is that gold is widely used in computers. Gold is a very important part in the computer’s processor or memory chips since it is a highly efficient connector to the computer’s motherboard. Also, gold is so malleable that it can be stretched into extremely fine measurements, so it is perfect for microchips and microprocessors.

Gerard Carter is a freelance article writer and jewelry enthusiast who focuses on articles regarding jewelry. He regularly writes for unitedrarecoins which is a one stop destination for information regarding gold and the cost of gold per gram.